You can grow mushrooms indoors and potatoes in the air

The City of Vantaa is already living the future. In implementing its green environmental program, the city has found operating methods supporting sustainable development such as indoor food production and urban agriculture. 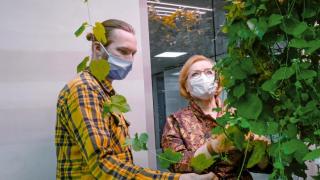 Where can you grow potatoes sprouting in the air, hops vegetating without mud or oyster mushrooms deriving their nutrients from coffee grounds? The correct answer is in Vantaa, more specifically, in Metropolia University of Applied Sciences’ laboratory in Myyrmäki. The farm is called UrbanFarmLab, and it is specialized in indoor food production and food innovations.

“Vantaa is building a sustainable future with the help of its strategic environmental program that directs the city’s development into an emission-free and waste-free city that uses its natural resources in a sustainable way. Our resource-smart roadmap has three goals: no emissions, no waste, no excess consumption. All this, combined with our greatest goal, carbon-neutral Vantaa, will be reality in 2030,” Viljanen says.

Food cluster partnering with the city consists of almost 50 businesses, including start-ups, restaurants, and food producers, the biggest of the latter consist of, among others, Valio, Fazer, and HKScan. The aim of this cooperation is to make Vantaa into the capital of urban food production by 2025.

“Vantaa has enormously big businesses that bear a great significance for the food production of Finland as a whole. In addition, we have start-up businesses that develop future food solutions. The aim is to diminish the food-related carbon footprint, to create circular-economy solutions, and to promote the birth of a new business,” Viljanen sums up.

Vantaa works with the biggest cities in the country on circular economy. 6Aika is a strategy for sustainable urban development. It is a joint strategy of the six largest cities in Finland and it meets the challenges of urbanization by developing new services and operating models.

“One of the challenges of urbanization is the diminishing amount of arable land. Therefore, we must promote urban food production. This applies to all food that can be produced in cities. Fast-developing technologies enable solutions that are not dependent on traditional agriculture. We develop and promote the new business in the CircularHoodFood project that combines knowledge of and creates new expertise in urban food production,” summarizes project manager Henri Laine of the 6Aika CircularHoodFood  project.

The project implements concrete trials in which food production in urban environment rises beside arable farming. New cultivation technologies make it possible to produce, for instance, vegetables, berries, mushrooms and foodstuffs indoors throughout the year. This creates vast future prospects as regards self-sufficiency, security of supply, and—in the long run—even prevention of famine.

Metropolia’s lab is a solid platform for new trials, and myriad businesses and start-ups participate in these trials, one of which is to grow hops hydroponically, that is, using aquaculture. Breweries currently depend on imported hops. But in the future, they may be able to cultivate their own hops.

Growing crickets is one of the most progressed projects in urban food production: bread made of crickets has been in the market for quite a while already. Laboratories can also produce meat-replacing products as well as protein mass with the help of microbiological culture.

“Indoor cultivation makes us independent of seasons and weather. We only need small amounts of water and no pesticides at all,” tells Kaj Lindedahl, project manager responsible for UrbanFarmLab.

The CircularHoodFood project will take the idea of urban food production to condominiums as well. They could grow their own vegetables in the future. Clusters of condominiums are planning to network and share resource-smart practices.

Connect & experience; How a startup nation is systematically organized and maintained

6Aika and experimental Vantaa: get the ball rolling