Get to know our International Talent Ali Basem Al-Darraji

Young, capable, and very determined. Hardworking, adaptable and extremely perseverant. Just like most entrepreneurs, Ali is highly skilled and passionate about what he’s doing. I’ve met him in Herttoniemi where a year ago he decided to create his own future. He took his passion for cars next level and together with his friend Ahmed opened a mechanic garage. 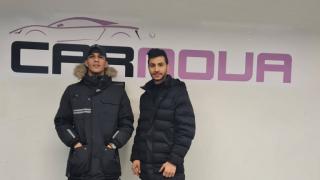 This is Ali Basem Al-Darraji’s story. It is not the average integration success story, even though his story is about integration and especially about success; both personal and professional.

His story is about determination and remarkable resilience, about breaking free from oppression and war in Iraq and starting from scratch here in Finland.

"I came to Finland in 2015 with my parents running from the hard and dangerous situation in Iraq."

While most foreigners come to Finland pursuing love or a good job offer, Ali and his family came to Finland 7 years ago to save their lives. "I came to Finland in 2015 with my parents running from the hard and dangerous situation in Iraq."

Ali came from Basra, one of the wealthiest and most prosperous cities in Iraq. Due to its oil reservoirs, there are many work opportunities in the area, so Ali has been working even though he was very young: "I have been studying about cars in Iraq since I was a teenager and was working in a SAS company. ´"The war changed all this unfortunately, and the whole family had to leave the country to save their lives. Once arrived in Finland they didn’t have anything apart from each other. "At first, we lived in Raasepori refugee camp, from where we have moved to Hyvinkää and later to Rauma."

The number of refugees and asylum applications in Finland peaked in 2015, 32,477 according to the official records, as large numbers arrived from Syria, Iraq and Afghanistan.

"I wanted to create a better future for myself and my family."

"At Rauma I’ve taught myself English and started looking for work, but I couldn’t find anything, so I kept studying. In 2017 I have applied for Vocational school to study Mechanics, but as I didn’t speak any Finnish, they didn’t accept me." Enrollment for Finnish language classes proved to be extremely difficult as he didn’t have a social security number. Neither did Ahmed, his current business partner who he met in Rauma. Their friendship tightens up in the asylum reception center, while talking till late at night about their future plans. They were dreaming of having their own business one day so their families would be financially secure. "I wanted to create a better future for myself and my family."

It’s fair to say that the existing integration policies have disappointed him. Many of us seek fast results in everything that we pursue and failing to see those results might frustrate or discourage us. Those weren’t options for Ali even though his asylum applications have been rejected consecutively 3 times and during the 4th one almost got deported. Even though he is very young, Ali took full responsibility of looking after his family and became the main provider for all 10 of them.

In 2020, after 6 negative decisions, together with his friend Ahmed Al-Khazraji, Ali decided to start their own company. They didn’t have any ‘startti raha’ nor consultants assessing their business plan. All they had was their dream from Rauma:  a safer and better tomorrow for themselves and their families.

So with the advice of their friend Mussa Ahmad, personal savings, hundreds of hours of hard work and extreme determination, they transformed it into reality.

"Mussa helped with everything, I owe him "big thanks" for supporting us a lot with the company. It wasn’t easy, we were doing all the hard work and after almost one year I got the residence permit. We are still working hard and planning in the future to make our company CARNOVA one of the best companies in Finland."

"Those six years I was living without residence permit here in Finland, was the hardest period of my life."

Ali was confessing that being trapped between consecutive negative asylum decisions and not having anywhere else to go was extremely difficult. ´´Those six years I was living without residence permit here in Finland, was the hardest period of my life.´´

During this rough time his family is what kept him motivated to push through.

Ensuring a brighter tomorrow for his younger brother who’s only 6 years old, fueled Ali’s determination, as well as making his dad proud.

"I would have to say that the person who has most greatly inspired me has been my father. All the power I have is from my dad" says Ali with a wide warm smile on his face.

Besides his dad, Ali is inspired by Erika Balandina’s kindness as she was guiding him when he first arrived in Finland. "I’m grateful to her for helping me with the language."

He would recommend all foreigners coming to Finland something that took him too much time to understand: Learn the language first and start creating your own future.

Even though he hasn’t attended any language or integration courses, Ali is contributing to the Finnish society by the work he passionately does daily in his garage. Since he has signed the agreement with Stadi for work training, Ali is looking after 10 students, 4 days a week, offering them the opportunity he never got, to learn mechanics in his garage.

So next time your winter tires need to be changed, or car needs repaired or washed, please consider Carnova. You’re not only receiving quality services, supporting youngsters in their professional development, but you also help creating jobs and supporting the community. You’re supporting a dream.

Get to know our International Talent -campaign is part of Kasvua Vantaalle kansainvälisistä osaajista – Talent Vantaa –project that implements the targets of national Talent Boost Program and receives funding from the Ministry of Economic Affairs and Employment. Project is implemented in cooperation with the City of Vantaa and Laurea University of Applied Sciences.

Leadership and Labor Law in the Finnish work environment

Get to know our International Talent – Barbora Kachlíková

Get to know our international talent Amalia

The capital region in a united effort to support its companies